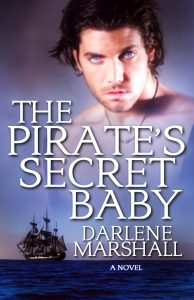 …“What is it you want?” Macdavid said, looking about the deck at his shabby little vessel, which looked like a flounder alongside the sleek, sharklike Prodigal.

“You! Reprobate! Wastrel! Knave! Scoundrel! Libertine! Villain!” Miss Burke sputtered to a finish having run out of epithets for the moment. The two crewmen escorting her looked at her with new respect, but she needed a few weeks aboard a pirate vessel. That would add salt to her vocabulary.

A slow smile curled his lips. The governess’s ugly linen cap was absent. While her hair was pinned tightly against her head, it shone in the sun, a glorious shade of chestnut with highlights of russet and gold. A few wisps escaped to curl across her forehead, with enough amber depths that it made one itch to unpin the mass and see all the colors gathered there. No wonder the little hedgehog kept it covered! Hair like that would inspire naughty thoughts in her employers and jealousy in their wives.

“You missed me, didn’t you, Miss Burke?”

“Why have you stopped this ship? What do you want with me?”

Anger looked good on her. The gray sack she wore hurt his eyes though. He’d have to do something about that.

Robert turned back to the hapless captain of the Clementine.

“You want her?” Captain Macdavid looked at her and scratched his beard, puzzled. “Well, all right, go ahead and take her.”

Miss Burke gasped, and pulling free of the men holding her, marched over to Macdavid. “You don’t protest this man kidnapping a passenger from your vessel?” she angrily pointed at St. Armand in case there was any question exactly who she meant.

Macdavid shrugged. “Your passage is already paid, so it’s all the same to me. I never guaranteed a safe journey, miss.”

She stood nearly toe to toe with the older man, her fists clenched. “Return my money!”

“I never promised that neither!” he protested, and Robert stepped forward and took the governess by the arm before there was bloodshed…